The elusive clickstream data. Many platforms, like Facebook and Google Ads, rely on these generated data from what a user clicks and what doesn’t. To start analyzing clickstream data, we need first to be able to capture step by step a user’s activity across a web page or application. And that is of great value in the hands of any internet marketer. Getting a 360-degree view of a customer by knowing what he is clicking and what he is not, can get you a huge improvement in both your products and your customers’ experience.

Either you have your data in your data warehouse, or you need to enrich it with more data sources you need to have a way to collect and store data consistently into a database.

Raw data is like a rough diamond; It requires some refinement before being truly valuable.

In the data world, refinement includes data processing, cleaning, and transformation of the initial data into something convenient for the analysis you are going to carry out.

In this case, we would like to have our data grouped into sessions. It would be good too, f we could arrange the events of each session in time order before moving to actual analysis.

In the above description, it is important to define what do we mean by the term “session”.  As a session we can consider:

In contrast to other data sequences, clickstream data can have varying lengths for every different session and different users.

In order to transform the initially collected event log into clickstream data we need to:

At this point the dataset we are going to use for the rest of the analysis should look like this:

In this representation, each line corresponds to a session. The first field is the session’s name while the next fields the actions performed by the user during this session.

As in most cases, the methods we can deploy for solving this problem are many. In this post we are going to evaluate two of them as they are widely used and easy to understand:

Markov process is a stochastic process that satisfies the Markov property of memorylessness. A Markov chain is, in fact, a Markov process too in either discrete or continuous time with a countable state space.

Graphically can be represented as a transition diagram along with the corresponding probabilities:

In clickstream analysis, we usually utilize these Markov Chains. The process X(n) takes the state m(n)  from a finite set m at each time n. The order of a Markov Chain is derived from the number of recent states on which the current state, we assume, depends. Based on this, zero-order chains imply that the probability of being in a state in the next step is independent of all previous states.

Higher-order Markov Chain introduced by the Raftery (1985) will lead to more realistic models. At the same time, the parameters needed for the representation increase exponentially and so it is important to find the right balance between these two.

As mentioned before at this point our dataset looks like:

We chose to use 3rd order Markov Chain on the above-produced data,  as:

Fitting the Markov Chain model gives us the transition probabilities matrices and the lambda parameters of the chain for each one of the three lags along with the Start and End Probabilities.

Start and End probabilities correspond to the probability that a clickstream will start or end with this specific event.

The transition probability matrix can be represented as a heat map with the y-axis representing the current state and x-axis the next one. 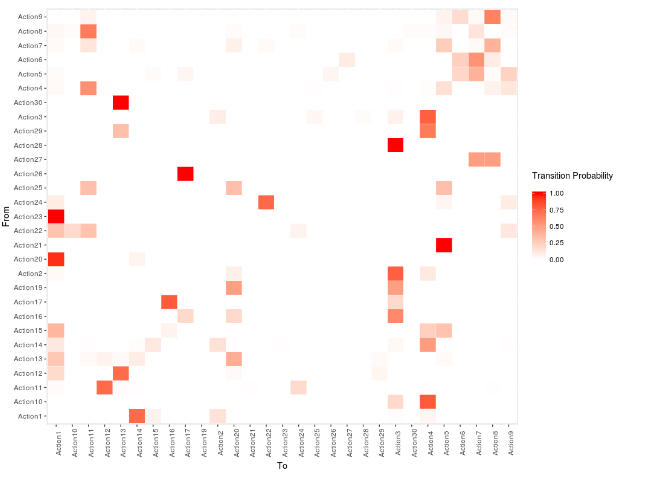 In clickstream analysis, it is often very useful to predict the next click or final click (state) of a user given the pattern he has followed until now. In this way, data-driven personas can be constructed that will incorporate users’ behavior.

Along with the click prediction, the probability of transition is also calculated.

This can be extended to find the most common use case scenario of an app or a web page.

In most cases, due to the complexity of websites or applications, the same clickstreams are difficult to occur as the different paths a user can follow are many. A large number of monitored clickstreams makes the analysis more difficult unless we group together similar clickstreams and user profiles.

This way a company can:

In our case, we performed a k-means clustering with 2 centers. At this point, it is important to provide a meaningful interpretation for each of the clusters.

For our clustering, we noticed that cluster by cluster the average length of clickstreams increase. This means that k-means clustered the clickstreams based on the number of actions the user that produced them performed during a session.

Graphically the clusters can be represented as: 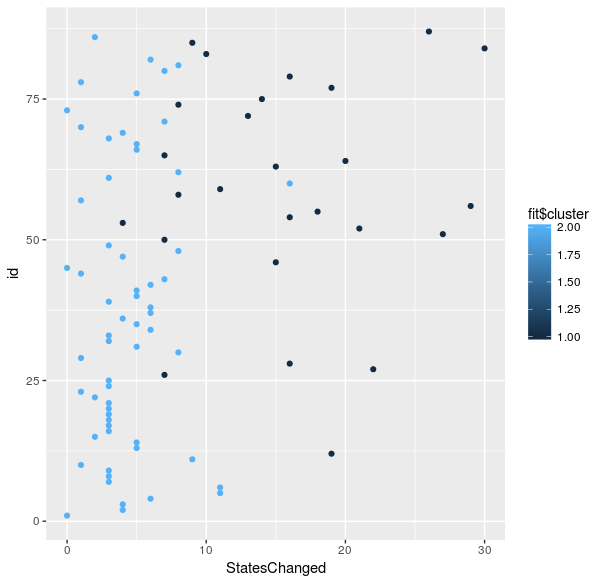 The y-axis represents a unique identifier for each session while the x-axis corresponds to the total number of states changed during each session.

Based on this, the light blue can be interpreted as users that perform a few actions and probably don’t spend much time on our page or application. Especially, for an application, it may represent users that achieved their goal easily and had no problem using the interface.

The dark blue cluster represents users that perform many actions and spend much more time navigating.

This interpretation can completely change on different data. In fact, there is no rule of thumb about how to perform the cluster interpretation and in most cases requires a deep understanding of the data and field expertise.

SPADE algorithm mines frequent patterns utilizing temporal joins along with efficient lattice search techniques. In the first step, the algorithm computes the frequencies of sequences with only one item, in the second step with two items and so on. (Zaki, 2001).

With this approach, a company can explore, understand or predict the visitor’s’ navigation patterns through a website or application.

Using cSPADE algorithm, we extracted all pattern sequences having minimum support that we defined.

For example, the following 22 pattern sequences are supported at least 40% of the clickstreams.

For a given sequence pattern S, we can predict the next click by searching for the pattern sequence with the highest support that starts with S.

For example,  after having just performed (A14) the most probable next action is (A4) according to pattern sequence 8 with support 73.5%.

At this point, we have explored Markov Chains and SPADE algorithm for mining Clickstream sequence data. By deploying the proposed models we can:

However, all this analysis is worthless unless it is driving actions. Based on the above results a recurring process of reviewing must be initialized regarding web or application design and content and marketing strategy.

For those interested to investigate further, as an alternative method for this analysis the computational search algorithm, considering a Genmax type approach can also be considered.

The code of the post can be found on Github.