What is the performance of my support team per group?

As your company grows bigger, sooner or later you will need to create different groups of support agents. You might have a group of first contact agents who will try to solve the issues as soon as possible. Then, as the severity of the problem increases, an engineer might have to get involved, she will be part of another group.

It is not uncommon to have different groups of agents inside the customer support function of a company and thus it is important to keep track of how each group performs. This is not only about performance if too many tickets end up being handled by your engineers you might have to reconsider your documentation or check with the product team to see what’s going wrong.

Blendo will sync all of your Zendesk data into your data warehouse properly prepared to be used for your analytics purposes. Some of the tables we prepare is the tickets table that we are going to use bellow.

The tickets table has the following structure 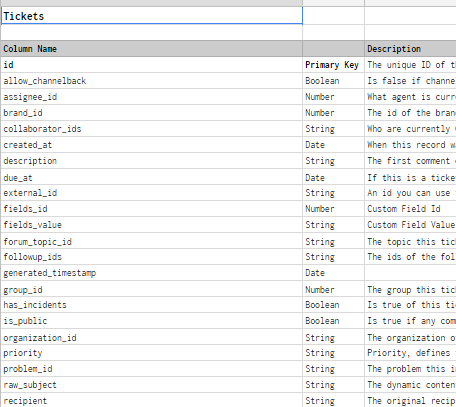 Go here to find out the full schema of Zendesk expected data.